skip to main | skip to sidebar

Next week, on St. Patrick’s Day, it’s the birthday of someone so influential in Hollywood that I’m sure you all know his name yet don’t know anything more about him than that. He was a showman, but not on the silver screen. He’s the one that brought luxury to the movie palaces of old, with his greatest being a little place called the Chinese Theatre. I’m talking about none other than Mr. Sid Grauman. 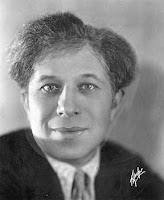 Born in 1879 in Indiana, Grauman was one of those types, the kind that traveled the country trying to make more of an exciting fortune. Before getting into the movie theater business, he tried his luck as a prospector during the Klondike gold rush. Failing at that, he bought his first live theater there in Alaska. He then moved down to San Francisco and opened The Unique, a vaudeville theater that would start his rise to Hollywood greatness. He had performers like Al Jolson, “Fatty” Arbuckle, and Sophie Tucker playing in his theaters, for within a few years, he had two others up and running. Sadly, the great 1906 San Francisco earthquake leveled all three theaters. This didn’t dismay him though. He set up a massive tent on the grounds of The Unique, with a sign advertising that in case of aftershocks, there would be “nothing to fall on you but canvas.” He sold 10,000 tickets per day. 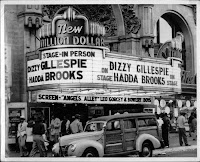 Several years later after building his theaters back up, Grauman sold them to Adolf Zukor (founder of Paramount Pictures) and moved to Los Angeles to begin what would lead to three of the most extravagant theaters in the world. His first theater was called the Million Dollar Theatre (because of the rumored price tag). The Million Dollar opened in 1918 on Broadway in downtown Los Angeles. At that time, Broadway was the center of the film world, not Hollywood. (Hollywood itself was still a budding community trying to build up.) Built in the Spanish Colonial Revival style, it rivaled all other theaters on Broadway. It opened with “The Silent Man” and had stars like Cecil B. DeMille, D.W. Griffith, Mary Pickford, Douglas Fairbanks, and Charlie Chaplin in attendance on opening night. The Million Dollar was the place to go. And its success allowed Grauman to purchase the Rialto and the Metropolitan down the street. Yet, he sold all his interests in the downtown theaters to focus on a new location – Hollywood. 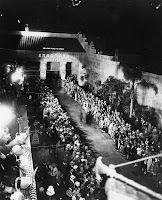 With help from Charles E. Toberman (nicknamed the “Father of Hollywood” for developing some of Hollywood’s most famous attractions, including the Hollywood Bowl, the El Capitan, and the Roosevelt Hotel), Grauman started on his first Hollywood Blvd. theater, the Egyptian. Thanks to the Egyptian craze sweeping the nation due to archaeologist Howard Carter’s hunt for Tutankhamun’s tomb, Grauman decided to use it for the grand theater’s international theme. After 18 months of construction and $800,000 spent, the Egyptian opened with the first-ever Hollywood-based world premiere in October 1922 with Douglas Fairbanks’ “Robin Hood.” Tickets for the premiere were a whopping $5, and the film ran in no other theater in LA for the rest of the year. The next big premiere was Cecil B. DeMille’s “The Ten Commandments” with which Grauman himself produced a live preshow including 100 costumed performers, a trait he would continue in all his theaters as long as he was able. 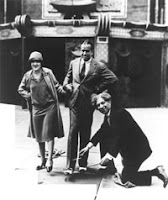 But Grauman had already started shifting his attention to his next theater down the road, the Chinese. Again with developer Toberman, as well as Grauman’s fellow shareholders Mary Pickford, Douglas Fairbanks, and Howard Schenck, construction begin on the famous movie palace. Bells, sculptures and artwork were flown in from China. Artists were brought in to make sculptures on the spot. And a man by the name of Jean Klossner was brought in to create a courtyard. There are several variations on how Grauman and Klossner came up with the idea of the footprints in the courtyard. One story said they got the idea after popular actress Norma Talmadge stepped in wet cement on opening night. Another story credits Pickford with accidentally stepping in the cement while chasing her dog through the construction site. Yet another claims Grauman just did it in fun one day and asked Pickford, who was standing nearby, to do the same. Whatever the true story though, it has become THE popular attraction for the Chinese, making it famous worldwide. 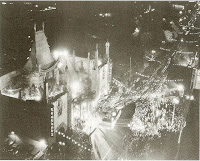 Grauman’s Chinese Theatre opened in May 1927 with DeMille’s “The King of Kings,” a premiere so sought after that there were riots with the fans trying to catch a glimpse of their Hollywood idols. The epitome of movie palaces, the Chinese was Grauman’s masterpiece. But in 1929 like so many others, he lost all his money in the stock markets. He sold his share in the Chinese and the Egyptian to Fox West Theaters but remained its managing director until his death in 1950.
Though the days of the glamorous theaters are gone, all three palaces still exist today. After the industry lost interest in downtown, Broadway started to become the Spanish community’s movie paradise. In 1949, the Million Dollar was purchased by Frank Fouce, a local Spanish language theater owner, and became the place to see Spanish-language films and performers. However, due to deteriorating times, the Million Dollar closed in 1993 and was sold off to a church who took very poor care of it, destroying much of the interior design. However the church eventually evacuated to another old movie palace down the road. The theater reopened in 2008 after spending more than $1 million on its refurbishment and is again focusing on the Spanish community.

The Egyptian, much like Hollywood itself, fell into much disrepair during the 70s and 80s. In 1996 though, LA sold the theater to the American Cinematheque for only $1 under the condition that they would refurbish the place to its original grandeur and purpose. After a $12.5 million renovation, the Egyptian reopened in 1998. However it is not exactly the same. The once large 2,000-seat auditorium was broken up into two theaters, one seating only 616, the other 77.

As for the Chinese, it has remained the image of Hollywood all these years, thanks to its “Forecourt of the Stars.” There are now nearly 200 handprints, footprints, autographs, and other variations (like the Harry Potter stars’ wands or Bob Hope’s nose) in the courtyard. It has been the host of thousands of premieres and even three Academy Awards ceremonies. Renamed Mann’s Chinese Theatre for a short time between 1973 to 2001, it is back to Grauman’s, owned by the same company that owns the Hollywood & Highland complex next door (home of the Kodak Theatre, the Academy Awards current home), and still remains the top-sought place to hold a premiere in Hollywood.


So, next time you’re in LA, take a look around you at the creations of Mr. Grauman, the man that started Hollywood’s glamorous standard. Have a great weekend, everyone! Til next week. 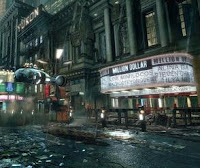 (Post-tidbit: You may have seen The Million Dollar Theatre already. It was prominently featured in “Blade Runner" (1982), for across the street is the famous Bradbury building which was used throughout the film, especially for the climatic ending.)